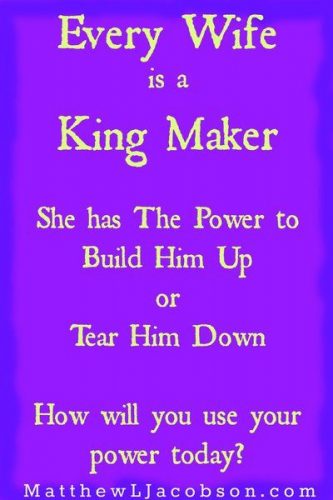 BE HIS LIFE LINE, HE NEEDS IT

Be his life line,he needs love and affirmation from you.

There isn’t a man alive today that can say they don’t value a woman’s opinion. In light of everything that is going on with our nation. they need us more each day. Our nation was to the point of togetherness with the wake of Covid-19 For once the majority seem to be on the same page. Stay home, social-distance and wearing protective gear , mask and gloves. finally togetherness. Then unemployment hit us hard. Our men already feel inadequate at times when it comes to taking care of their family. But they will do anything to make sure no one goes hungry. Then another act of racist violence at the .hand of the police. How much more burden can our men carry in their hearts. It’s very hard for them to tap into their emotions. Mainly because they are visual creatures. But if you look into their eyes sometimes you can feel there soul. So don’t always look for them to tell you what they are feeling. Its all in their actions.

Over the course of their lives some men had it rough growing up. They may have been abandon, abuse, by there parents or other family members. Some may had lost their parents. Some may had let the streets raise them to the point where they seen all kinds of turmoil. they could have seen death at a young age. They may had a life of crime just to survive because their parents was on drugs, so they was left to feed themselves by any means.

So I say to the ladies speak life into the man you love affirm him as often as possible. The world has a way of beating him down so much to the point of rebellion to prove that they are worthy and deserve there place as a citizen of this nation. They will always listen to the woman he loves. Why do you think some men always have female friends? it’s because they will affirm him . men need that. No matter how tough they are. If they Mother, Grandmother, Auntie or even their Sister give them some advise they usually listen. Its because he loves them and know they would never hurt them. The same goes for his lady. He definitely loves you if he values your opinion. You tell them do A not B and they will listen. You know why? Because you always speak life into his spirit. You don’t have to argue to state your position on an issue. I’m talking about a good man. Show him his potential he probably never had that growing up. No one told him he can achieve as long as he believe. Speak it until he gets it. Keep speaking words of affirmation and appreciation. Because he needs it from you. Be the life line he needs.