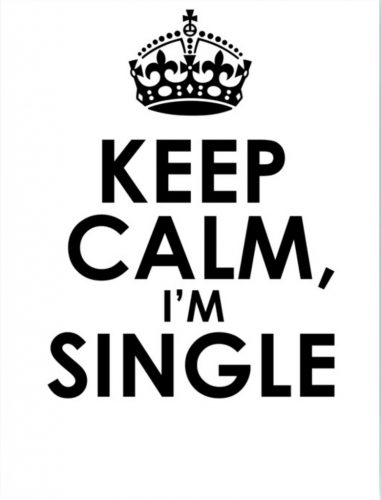 The Blessings of the Single Season

Being single is the blessing in disguise that many of us don't realize until it's too late.

More often than not, we don’t recognize our many blessings until we acknowledge them in hindsight. Afterall, hindsight is 20/20. So, it comes to no surprise that so many singles are unaware of the blessed times they are living in as we tend the see the glass as half empty instead of half full.

My question for you is “what exactly are you afraid of?” Many singles, especially women are afraid that they will be single forever. We fear that if we let go of this bad relationship, we won’t find another one; a better one. We fear that the longer we are single, the less desirable we will become. The thoughts and opinions of others run rapid in our minds and we fall into a state of panic instead of embracing a spirit of patience.

There are so many negative stigma’s associated with single people it’s ridiculous. I am speaking to women in this particular moment as I cannot speak to the experiences of single men. For women, if you are single, especially if you are in your late 20’s or 30’s and up, it is assumed that you are good and crazy if no one has “snatched you up”. I will say that it’s different in different parts of the country in my experience. With my being from Chicago, when I was in my late 20’s, single with no children, I was considered a precious treasure to have achieved such a milestone. But when I moved to Houston, being in my late 20’s with no children and never been married, I was looked at as peculiar to say the least. I cannot tell you how many times a man has asked me “are you crazy or something?” It’s draining but that is the society we live in.

As a single woman, I am independent. I have a good career, my own home, car, etc. I can take care of myself just fine. Some men find that intimidating. Or at least that’s what I thought. Males find that intimidating. Men appreciate it. Let’s stop confusing the two. Another unfortunate assumption is that if you are single, you must be hard to deal with and downright unlovable, or my all-time favorite, you are doing something wrong. I’ve had groups of unhappily married women ask me “what do you think you are doing wrong” because I was the only one at the bar-b-que without a significant other. I was advised that the problem was that I wouldn’t approach men and I had the nerve to actually want to be attracted to my future hubby. I can’t speak for anyone else, but that is not God’s plan for my life.

The masses have created this stigma that being single is wrong. Now, let’s be clear, I desire marriage and companionship and I had no intentions on being single for as long as I have. But over the last 5 years, I have learned this beautiful thing called contentment. I’m not where I want to be but I’m perfectly content with where I am as I have grown exponentially throughout the years. Contentment yields peace.

What is your biggest fear as a single? I’ll tell you mine. My biggest fear was that I was going to grow old and alone without ever getting married or having children. Many people share this fear so let me tell you a very short story. I have an aunt who never got married or had children. She wanted to but it never happened. She named me and a few of my cousins the names she had intended for her kids. Why she never wed is for another blog but growing up, I was scared to death of becoming like her. We must embrace the beauty of perspective. Over the years, my perspective changed greatly. I grew up so afraid of that outcome because I was looking at the things that she did not have, and never once did I consider the things she did. She may not have gotten married or had kids but one thing she has is peace. This is not to say you can’t have both but most of her brothers and sisters who were married and/or had children lacked peace to say the very least. Again, the glass is half full, not half empty.

About a year or so again, I read “Single is Not a Curse” by Tony Gaskins. This book blessed my spirit so if you have not read it, I encourage you to do so. This read taught me the importance of shifting your mindset and taking advantage of the present. It’s funny how some circumstances we know are not permanent but others, we can’t help but believe they are. For example, when we catch a cold or maybe have an acne breakout, we know for a fact that it will pass in due time. But when it comes to being single, we swear it’s a life sentence. Where did we get that from? I challenge you to change your perspective.

Consider being single as your season of preparation. Instead of being so obsessed with finding someone, I encourage you to become obsessed with becoming. Author Andy Stanley encourages singles to “become the person the person you are looking for is looking for.” Read it a few more times and it will make perfect sense. Enjoy this time that you have to yourself. Many married couples I talk to (even the happy ones) encourage this because once you are married, you do not have the same freedom you once had. This is not a bad thing, but it is a thing. I can pick up and take a trip without consulting with anyone. I didn’t have to discuss going to Grad school with my spouse and how that will affect us financially. I don’t have to have a sit-down talk about a new business venture I want to embark on. If I hang out with friends and stay out a little too late, I don’t have to explain myself to anyone.

I don’t say these things to insinuate that I dread marriage and companionship because I don’t. I truly look forward to it, but I carry the mindset that this is the season for me to become the best version of myself in my singleness so that I can bring that version of myself to my marriage. I can work on the areas of brokenness that I struggle with and address those issues before the person as opposed to during or after the fact. Let’s be clear, you’ll never be completely ready for marriage, but it is important to understand that when you choose a partner out of frustration and fear, you may not make the best decision.

In conclusion, the glass is half full, not half empty. This can be a glorious time for you if you make the choice to embrace it. Not only that, but we must be mindful of the energy we are putting out. If you are single and desperate, people will pick up on that and prey on your desperation and the insecurities you carry because of it. I challenge you to be mindful of the energy you carry because that factors greatly into the person you will attract. And seeing as how falling in love with the wrong person is the biggest mistake you can make in your life, in my humble opinion, you want to operate at the highest frequency in order to have a fighting chance at success.